Write about the three most important songs of your life, state the instructions on my computer screen. Immediately, I thought of the Black Eyed Peas’ ‘I Gotta Feeling.’ Three songs, impossible, two yes, but three? I can’t even think of three songs, I tell myself. Then songs started flooding my thoughts: ‘Always’ – Al Green; ‘Let’s Stay Together’ – Al Green; ‘Man! I Feel Like a Woman!’ – Shania Twain;  ‘What’s Love Got To Do With It?’ – Tina Turner; ‘Manic Mondays’ – The Bangles; ‘Love Shack’ – B-52s.

How could I choose just three? I settled on ‘I Gotta Feeling’ and two pairs of songs that evoke similar feelings: ‘Man! I Feel Like a Woman!’ and ‘What’s Love Got To Do With It?’ and ‘Always’ and ‘Let’s Stay Together.’ But before I sat to write, I was reminded of ‘Let’s Twist Again’ by Chubby Checker.  Certainly that song, my first song had to make the cut for my short list.

The lyrics of my first anthem echo in my ear, “Come on let’s twist again, Like we did last summer! Yeaaah, let’s twist again, Like we did last year!”  I picture my toddler self, platinum blonde ringlets framing my certainly cherubic face twisting away. Chubby Checker and his dance songs including ‘Let’s Twist Again’ topped the charts in the 1960s. Every time the song was played or someone pointed a camera in my direction, I would break into the twist.  Or so I’ve been told.

I held onto the twist even during my awkward and painfully shy teen years.  I did by then, however, stop spontaneously busting into dance when a camera was focused my way. When Chubby sang a Twist song, I was on the dance floor. ‘Let’s Twist Again’ was the carefree anthem of my youth that allowed me the freedom to be myself.  I could twist and shout and frankly not care if anyone was watching my gawky teen self.  The song is so definitely my song that at my sister’s wedding one of my aunts dedicated it to the maid of honor – my thirty something self.

So this song is surprising because not a lot of country songs end up on any of my playlists. Truth be told, I think I might be a closet country fan … well just a little bit.

This song and others of Shania belong on my playlist – My Man has Pissed Me Off Yet Again and I need to climb down off the ledge before I hurt someone, probably him.

You know the moments when your other half gets on your last nerve and you know your reaction is not going to be pretty? That is when I pull out Shania to help me through the rusty fork moments, the moments where I can totally understand what Chris Rock meant when he said, “… If you haven’t contemplated murder, you haven’t been in love …”

I play Shania so loud and sing along to ‘Man! I Feel Like A Woman!’ until I’ve all but forgotten what upset me in the first place and gotten over my anger.   This song is #1 on My Man has Pissed Me Off Yet Again playlist. The funny thing is although I’ve never asked him, I’m pretty sure that my other half despises this song and a few others on that playlist. He really should be grateful that this Shania song can soothe the anger I feel and has saved us from more than one battle over the years.

This song is just one of those catchy pop songs you can’t get out of your head once you hear it.  It’s upbeat and energetic.  That in itself is not enough to make it a significant song to me. 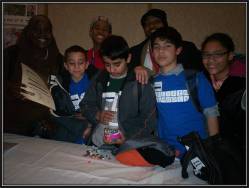 I volunteer as a Citizen Teacher through the extended learning time program, Citizen Schools. Each semester culminates in a showcase event called a WOW! – think science fair. The night before my first WOW!, I did not sleep. I was so nervous for my students whom I felt needed 2 – 3 more weeks to be ready for this event. My jitters reminded me of how I felt before third grade spelling tests – spelling that week’s words over and over in my head until I fell to sleep. But, I was the teacher now and I couldn’t do anything about it – it was up to my students to teach back to the community what they had learned during the ten weeks of our apprenticeship. “OMG!,” I thought, “I hope I taught them something worth learning.” I was left to toss and turn through the night as I anticipated the WOW! and how my students would fare.

When I left my office the next night, I was filled with dread as I headed to Boston Architectural College for the city-wide event. I stopped at the 7-11 near State Street Station to grab a diet soda and some mints. As I walked in, the sounds of will.i. am and The Black Eyed Peas singing ‘I Gotta Feeling’ echoed from the radio on top of the store’s cooler. Immediately, my mood changed. The dread in the pit of my stomach was replaced by euphoria. The song was a signal that everything was going to be alright. And it was. My students not only amazed me but they rocked it that night impressing my industry colleagues with their knowledge and grasp of commercial real estate.

That night I decided to teach another apprenticeship – five total to date. And, when my students express their own fears about WOW! , I tell them the story of my first WOW! and we listen to ‘I’ve Gotta Feeling,’ the PG Chipmunks & Chipettes version of course, which has become the theme song that rallies my students before WOW!.

And, for the record, I would totally love to hang out with will.i.am for a day; his energy and enthusiasm inspire me. Maybe he can show up for the class before my next WOW! and sing for me and my kids. “Ooooooo hoooo.”