October is Ghouls, Goblins & Guest Bloggers month at from the sticks to the bricks and back again.  The first blogger to post is DonnaMarie from iheartfilm.   When DonnaMarie is asked why she blogs at iheartfilm she responds “I’ve been a movie fan since I was a little kid tagging along with my sisters to the Saturday matinee.  A theater full of kids, popcorn and some of the worst/best B-movies of all time! “

DonnaMarie’s website – iheartfilm – is dedicated to movie lovers everywhere and expresses her passion for all things film! Halloween is her favorite holiday and she is thrilled to be sharing one of her favorite fright night flicks with us.  So grab some popcorn, relax, enjoy DonnaMarie’s review and beware the stare.  Please thank DonnaMarie by visiting iheartfilm. 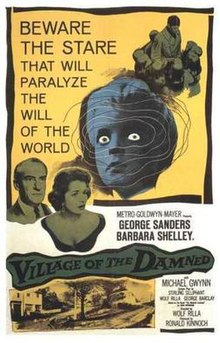 Okay, so how do you explain to your seafarer husband who’s been away for a year that you’ve got a bun in the oven but have no idea of how it got there. Well, that conversation becomes the common story in the small English village of Midwich in the 1960 British science fiction movie, “Village of the Damned” directed by Wolf Rilla. Every woman and girl of childbearing years has become pregnant as a result of the day the entire town inexplicitly falls unconscious at the same time. And what are the ramifications? A town filled with accusations of infidelity and extramarital sex.

Professor Gordon Zellaby (George Sanders) who married later in life, is the only man in town feeling like the proud papa after his wife Anthea’s (Barbara Shelley) announcement of their soon to be bundle of joy.

However, even the Professor becomes concerned when after his wife’s x-ray, the doctor reveals that the 5-month embryo has developed into one at 7 months. Also, when the women of the village give birth (on the same day mind you), it becomes apparent how all the children have the same striking features. blond hair, exceptional intelligence and eerily intense and mesmerizing eyes.

Professor Zellaby wants to study the children (who at 3 years of age have the physical appearance of  six year olds)  to understand their telepathic powers and where they come from, even offering to teach the youngsters. Meanwhile, the rest of the male villagers consider the children unnatural and evil and begin plotting ways to dispose of them.

The Professor’s son David (Martin Stephens) is the leader of the unnervingly stoic pack and explains to his father that they are all psychically connected and their powers are growing daily. Knowing the townspeople fear them, (and for good reason, they have the power of mind control and there have been several heinous deaths that are attributed to the emotionless children) all they really want is to be left alone.

As it becomes apparent that the powerful children are in total control and extremely dangerous, the Professor devises a telepathic diversion (so the kids can’t read his mind) to end their supernatural reign.

A storyline involving the demise of children is dicey at best, but with an intelligent script by Stirling Silliphant, adapted from the John Wyndham 1957 novel The Midwich Cuckoos, and outstanding performances by the children lead by Martin Stephens (David), German director Rilla is able to answer the question – How do you bump off a brood of fair-haired extraterrestrials? Although a tough subject matter to broach, the film succeeds in creating tension, creepiness, and horror. 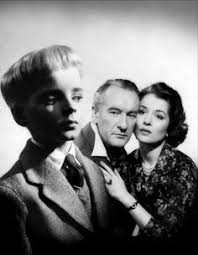 A review, at the time, by critic Dilys Powell in The Sunday Times sums it up: “Well made British film: the effective timing, the frightening matter-of-factness of the village setting, most of the acting, and especially the acting of the handsome flaxen-haired children (headed by Martin Stevens) who are the cold villains of the piece.”

So, as the tagline for the film warns: 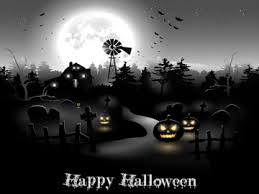 I've been a movie fan ever since I was a little kid tagging along with my sisters to the Saturday matinee. I consider myself a true film aficionado. I even speak in movie quotes! View all posts by donnamarie

5 thoughts on “Village of the Damned Children Halloween!”