October is Ghouls, Goblins & Guest Bloggers month at from the sticks to the bricks and back again.  Today’s guest blogger is Michelle from the creative duo Moose and Michelle who blog over at The Lonely Tribalist.

The Lonely Tribalist as explained in their about page is “a blog run by Michelle, a 22 year old college super senior studying Applied Linguistics and looking toward a bright future of tricked out ramen dinners and taking people’s orders for coffee. By her side is her support companion, Moose, a 35 year old world-weary traveler intent on spreading the gospel of sustainability and tribalism one impromptu Starbucks conversation at a time.”

No subject is off limits at The Lonely Tribalist so please visit Michelle and Moose and their eclectic collection of posts after reading Happy Halloween: Another Day in Paradise.

Another day in Paradise.

When the first rays of dawn hit my eyes this morning, I knew it was going to be a great day. I couldn’t explain it without possibly herniating my brain, but my body felt fresher than it had ever felt in my life. Leaves crunched and crackled beneath me as I loosened my muscles and got out of bed. Shaking off the last flakes of sleepiness, I step over the

but it’s clothesline of empty cans. The view of the city from the butte is always a treat – it’s a modest little corner of the earth, my little corner of the earth. The air was beautifully quite, as it had been for years. No birds. No squirrels. It had been months since any deer had strolled on by. No other pests were around to threaten my good day. There was only the rustle of the trees and the soft jangling of my perimeter of cans.

It’s time to get to work. My cabinets are running low on food and I’d been eyeing the selection of meat hanging around the deli window for a couple weeks. There had been a new shipment of meat at the local grocery store, which was unusual, but far from unpleasant news. I saw them stalking the shelves with new product in tow almost one month ago. If it hadn’t been for their lack of conscientiousness about the amount of noise they were making, I would have walked on by the store as usual. For the past few months, I’d grown tired of the local grocery store and had decided to go elsewhere for my shopping. Corporate decay isn’t very appetizing. But seeing the fresh, high quality meat in that store has made me change my mind – at least until they run out.

I swung my pack onto my back, economically filled with a bottle of water, three granola bars, and a flashlight, among other knickknacks that could be useful in a jam. I slip my revolver into the left side of my pants and slide my police baton into the right. The walk to town takes about 2 hours and is almost always a peaceful one. As a lone female, it’s par for the course to expect disturbances, being followed, getting unwanted attention here and there. It’s something I’ve gotten used to over the years. It’s not their fault. “It’s not like I can expect them to know better,” a friend of mine told me some time ago – the same friend who gifted me my baton, which has saved my ass countless times over the years. If only she had listened to herself, then she wouldn’t be buried along the shore of Little Butte Creek with a bullet in her brain.

I used to hate coming into town. The excess that spilled over into the streets used to give me a sinking feeling, as if I would never leave this place again, as if the sight of all this consumer-driven anger and greed would be the last image on my corneas before I died. But that fear is long gone. The only feeling I get when I enter town now is a painful rumbling in my stomach. The store is calling to me.

I hear them talking to each other as I step through the doorway. The automatic sliding doors had stopped working about a year ago, when a car had apparently paved a path through the doors. The Volvo was still there, covered in grime and other dark, crusty material. The desiccated body of an Infected was still pinned to the hood of the car. I gave it a lucky pat on the head as it’s eyes dryly followed me down the aisle.

The two guys continue to stalk the shelves and they really aren’t subtle about it at all. Six years ago, I would have called them discourteous, but now – well, now, I don’t feel much else other than hungry. One of the guys in the store is grumbling about how low the supply has gotten in the store. The other tells him to “suck it up.” The grumbler says something under his breath and pulls a large jacket over himself. It looks like it’s lined with wool. And it seems I came at a good time. They’re talking about leaving soon to find other stores with better stocks of food. I can’t let them leave with all that product now.

It’s too easy. The grumbler rounded an aisle and I cracked his skull along the temple with my baton. The breaking of his skull made a satisfyingly loud crunch, as he let out a cry and fell to the ground like a sack of meat. Mr. “Suck It Up” called out the grumbler’s name and began to scramble over to this aisle. He never even heard the revolver. 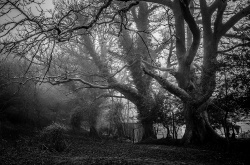 The sun is dying, earlier than it had yesterday and the day before that. I shift myself closer to the fire, wrapping my new jacket around me. The wool is soft and itchy, but most importantly, it lets none of the cold in. The collar is still wet from the scrubbing I had to give it, but otherwise it’s perfect. I slide the bones off of my plate and into the fire, watching the flames lick up the remaining threads of sinew. The product was even better than I had imagined – lean and tender. There’s a tinkling of cans dancing around each other to my right. I look up. It’s only the wind. Eat or be eaten – the elegant simplicity of life. I shut my eyes and smile. I can’t wait to try the grumbler tomorrow.

Another day in Paradise.

View all posts by The Lonely Tribalist

3 thoughts on “Happy Halloween: Another Day in Paradise”